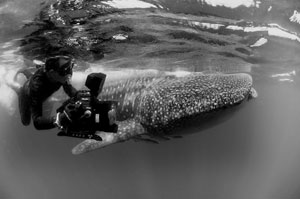 Michael Pitts specializes in filming underwater and is regarded as one of Britain's foremost underwater cameramen. However, he is equally happy shooting on the surface or from the air. Amongst his many awards he has received Emmys for cinematography on two BBC landmark series: David Attenborough's 'Private Life of Plants' and 'Blue Planet'.

In 2012 he was responsible for the underwater filming of the Sir David Attenborough 3D series on the Galapagos produced by Sky/Colossus. Formatted for cinema the series was released as a film in selected UK cinemas in 2014. He has recently returned from the Falklands and Ascension Island after filming on the new BBC NHU series 'Atlantic'.

Currently he is working on his own production, which follows the changing seasons and the work of a landscape artist.

Michael has over 20 years experience of making wildlife and science documentaries for the BBC and Independent Companies. He works with a variety of camera systems including the RED Epic, the Arri Alexa and the Arri 435. He is now moving into the world of 3D acquisition.

Besides his filming work he also shoots stills and his work has appeared in numerous publications and books. His portfolio of work is held with The Nature Picture Library.

Over 20 years experience of making wildlife and science documentaries.